The Seljuks: Nomads Who Built an Empire and Took On Byzantine Power 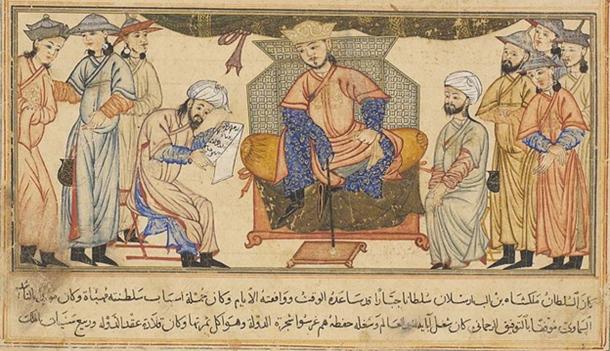 Malik-Shah I, ruler of the Seljuks, seated on his throne.

I thought this an interesting little piece about the Seljuks who I could do with knowing more about. It was they who defeated the Romans at the Battle of Manzikert, capturing Byzantine emperor, Romanos IV. It was a defeat that the empire really never recovered from.

The Seljuk Empire was a medieval empire that existed between the 11th and 12th centuries. They are most famous for their invasions and battles against the Byzantine Empire and later their role in the First Crusade. Although the Seljuks were originally a Turkic people, they intermarried with the Persians and adopted much of their culture and language.

At its most extent, the Seljuk (Seljuq) Empire stretched from Central Asia in the east all the way to Anatolia in the west. By the end of the 12th century, however, the Seljuk Empire had fragmented into a number of smaller states which were ruled by other dynasties. Nevertheless, the Seljuks continued to rule over Anatolia as the Sultanate of Rum.

The Seljuks were originally Turkic nomads who inhabited the steppes of Central Asia and Southeast Russia. The name of this people is taken from their traditional ancestor, Seljuk, who was a chief of the Qinik, a branch of the Oghuz Turks . Around 950 AD, Seljuk migrated to Khwarezm while serving in the Khazar army. Later on, around 985, Seljuk led a confederation of nine Turkic tribes to Persia, where they settled down and converted to Sunni Islam .

The Seljuks allied themselves with the Persian Samanid Empire and intermarried with the local Persian population. As a result, many aspects of Persian culture and language were adopted by the newcomers. The alliance with the Samanids did not last for long, however, as they were destroyed by the Qarakhanids in 999. The Samanids were replaced by the Ghaznavids and the Seljuks were at war with them.

It was two of Seljuk’s grandsons, Tughril Beg and Chaghri Beg, who fought against the Ghaznavids. Although the Ghaznavids had the upper hand initially, they were decisively defeated by the Seljuks in 1039 at the Battle of Dandanaqan. As a consequence, most of the western territories of the Ghaznavids were handed over to the Seljuks. This marked the establishment of the Seljuk Empire, and the two grandsons of Seljuk are credited with its foundation.

Tughril died in 1063 and was succeeded by his nephew, Alp Arslan, who continued the expansion of the empire. It was during the reign of Alp Arslan and his successor, Malik Shah I, that the Seljuk Empire reached its height of power. Alp Arslan expanded into Armenia and Georgia and fought against the Byzantine Empire .

In 1071, Alp Arslan won a decisive victory over the Byzantines at the Battle of Manzikert . The Byzantine emperor, Romanos IV, was taken prisoner by the Seljuks and Byzantine control over Anatolia weakened considerably. Nevertheless, Alp Arslan did not live long enough to conquer Anatolia, as he died in the following year.

Alp Arslan was succeeded by his son, Malik Shah I, who continued his father’s military campaigns. It was during his reign that Anatolia was conquered by the Seljuks. In the east, the Seljuks fought against the Qarakhanids and were able to expand into Central Asia all the way to the western borders of China.

When Malik Shah died in 1092, the Seljuk Empire lost its unity, as his brother and four sons fought for power. Although Malik Shah’s son, Mahmud I became the new ruler of the Seljuk Empire, he was not able to hold the empire together.

His claim to the throne was contested by his three brothers, Barkiyaruq, Muhammad I, and Ahmad Sanjar, who had established themselves in Iraq, Baghdad, and Khorasan respectively. Additionally, a distant relative, Kilij Arslan I, had founded the Sultanate of Rum in Anatolia, while Syria came under the rule of Tutush I, one of Kilij Arslan’s brothers.

While this fragmentation was going on, the Seljuks faced a new enemy from the west in the form of the First Crusade . The Seljuks were unable to unite against the Crusaders and the various Seljuk rulers allied themselves with or fought against the invaders as they saw fit. Although the Seljuk rulers dreamt of reunifying their empire, this was never achieved.

The Seljuk Empire continued its existence in the century that followed, though it no longer wielded the power it once enjoyed under Alp Arslan and Malik Shah I. In 1194, the Seljuk Empire lost much of its eastern territories to the Khwarazmians and the last Seljuk ruler of Iran, Tughril III, was killed in a battle against them. Seljuk power survived in Anatolia as the Sultanate of Rum , until it was vassalized by the Mongols following the Battle of Kose Dag in 1243.

Interested in Byzantium and Patrick Leigh Fermor
View all posts by proverbs6to10 →
This entry was posted in Uncategorized and tagged Manzikert, Seljuks. Bookmark the permalink.