Turks sense dawn of new era of power and confidence 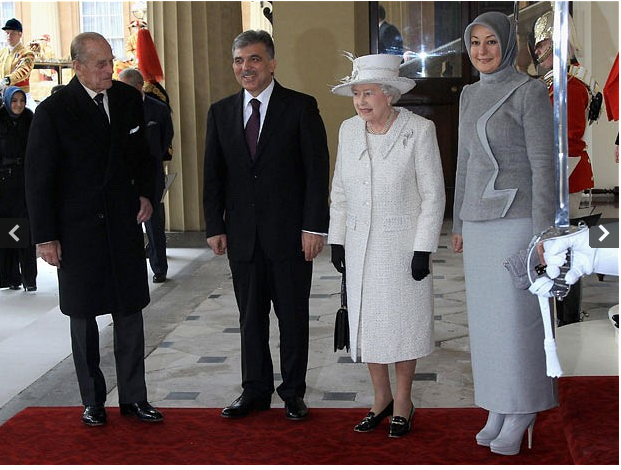 This week the Turkish President, Abdullah Gul came to Britain on a successful three day State Visit. Turkey is a rising power and this was demonstrated in a number of ways this week. Perhaps the two most relevant being its increasingly important role in the crisis in Syria, and also its economic strength when compared to the debt ridden states of the EU. Whilst perhaps admiring Turkey’s progress we should not forget that in the late 19th Century the Ottomans were addicted to loans from European banks, and had to eventually agree to having their tax revenue collected by private companies imposed by the Great Powers.

The dome next to Istanbul’s ancient walls is one of the city’s newest tourist attractions. The 360 degree panorama, complete with sound effects of cannon fire and fighting, depicts the moment in 1453 when the Byzantine city of Constantinople was seized by the Turkish Sultan.

On the painted walls, Ottoman troops are poised for the final assault. Across the sky, flaming firebombs leave smoking trails. Close up the battle is already raging. The city’s walls are crumbling. Soon Constantinople will fall and the era of the Ottoman Empire will begin.

The dome is crammed with excited Turkish children on school trips, all visibly impressed by this vista of a glorious past.

“It’s a significant moment, the salvation of Istanbul,” says 15-year-old Jansu. “There’s nothing bigger… It really gives you a great feeling.”

Turkey’s prime minister was greeted by crowds in Tunisia, Libya and Egypt Turkey today is booming. And with its growing economic clout has come a new assertiveness that has led some to wonder if it harbours neo-Ottoman ambitions to resurrect its role as a dominant power in the Middle East.

Turkish diplomats dismiss talk of neo-Ottomanism. They point out that Turkey is a loyal member of the Nato alliance, an important EU trading partner, and that it remains firmly committed to reforms to make it eligible for EU membership, should that moment ever come.

It is, they emphasise, a diplomatic bridge between East and West, not a power with imperial designs.

Yet in recent years, Turkey has not always acted in concert with the West. It forged separate and closer ties with Iran. Differences over Gaza plunged its relations with Israel into a deep freeze. Autocratic Arab leaders including Colonel Gaddafi of Libya and President Assad of Syria were courted as part of a new policy of ‘zero problems with neighbours’.

That policy was swiftly reversed when parts of the Arab world descended into turmoil this year. But Turkey has not taken a back seat. Now it presents itself to the new governments of the Arab Spring as a model, a useful example to show that Islam and modernity can go together.

Prime Minister Recep Tayyip Erdogan was greeted by cheering crowds on a triumphant tour of Tunisia, Libya and Egypt recently.

Once an ally of President Assad, he has turned into one of the Syrian regime’s most strident critics, threatening sanctions and deliberately offering sanctuary to Syrian opposition groups.

Suleiman the Magnificent is Turkey’s latest wildly successful soap opera In Istanbul you will find members of the Syrian opposition demonstrating outside the Syrian Consulate after Friday prayers. A small clutch of protesters huddles, waving flags and calling for President Assad to go. The opposition members in exile are grateful for Turkey’s willingness to give them a home but fearful of what may happen next.

“There is a very dangerous situation in Syria,” says Omar Shawad of the Syrian National Council. “President Assad has no friends anymore, except perhaps Iran. So he has no exit and that means he’ll fight to the end.”

He added that if the outside world, with support from the Arab League and at the United Nations, did decide to take action, then it would be Turkey in the north and Jordan on Syria’s southern border, who would be the key players:

“If there is an intervention in Syria,” he said, “It would need to have a base, and that base can only be here, so Turkey is very important.”

And Turkey has much at stake in the outcome. If somehow the Assad regime were to survive, there would surely be no way back to neighbourly relations. But getting drawn in to any kind of intervention that might mean Turkish troops on Syrian and therefore Arab soil might also be risky.

But it is not just Turkey’s political rhetoric and its potential for military action that enhance its projection of power. There is also ‘soft power’, cultural exports which are strengthening links with neighbours in other ways.

On a film lot in the Istanbul suburbs, a set has been meticulously crafted to replicate interiors of the Ottoman Sultan’s palace.

The film crew is hurriedly adjusting the lighting; make-up artists are giving a final check to the cast. Concubines to the emperor shiver slightly in their satin gowns and filmy veils, waiting for the signal to start.

Suleiman the Magnificent is Turkey’s latest wildly successful soap opera. Set during the 16th century, when the Ottoman Empire held sway over much of the Middle East, it is a rags to riches story, redolent with seething passions and secret politics.

The co-directors are two brothers, Yagmur and Durul Taylan. They believe that the appeal of the series lies in nostalgia, a harking back to a golden age.

“Everyone wants to get power. In Turkey we all want to feel like Suleiman,” says Durul.

“Because we want to be a big and powerful country again,” adds Yagmur. “You can feel it when you talk to people in Turkey today.”

But Turkey’s soap operas are also sending another message that has proved an unexpected tool of foreign policy further afield.

Soap operas set in Istanbul have inspired a big increase in tourism, their distributors say On a pleasure boat along the Bosphorus, a tour group of young Arab couples on honeymoon watch the shoreline from the deck. As the boat passes an elegant sultan’s palace and they all rush to take a photo.

They know the palace well, it’s an exterior used in another Turkish soap opera which has taken the Middle East by storm. Since these television dramas captured audiences of millions in the region, the numbers of Arab tourists flocking to Turkey has, according to the distributors, gone up 10-fold in six years.

Hamza and Raja are on honeymoon from Jordan. He is in jeans and a jacket. She is wearing a face veil.

Turkey, they explain, is an exotic but safe option. Like its soap operas, it is familiar but exciting, offering an aspiration of what they would like their country to be: a Muslim country, but modern and European as well.

So coming to Istanbul is a chance to experience a Western-style country without the risks of venturing too far into the unknown.

But for some Turkish intellectuals in Istanbul that aspiration is paradoxical: contemporary Turkey may have been demilitarized, but not everyone thinks that Turkey has yet won the right to put itself forward as a model of a modern Muslim democracy.

At the Istanbul International Book Fair, there is a crush at one bookstall. Crowds of supporters have gathered in support of a well known publisher and columnist, Ragip Zarakolu, whose posters are plastered on the walls.

He was recently detained and is being held without charge, one of dozens arrested as part of a vast operation against presumed sympathisers of outlawed Kurdish groups.

According to the International Press Institute, Turkey has more journalists in prison than either China or Iran. Many have not been charged.

The government argues that its wide ranging anti-terrorist laws are necessary to get on top of a destructive Kurdish insurgency which has this autumn once again become a major problem.

But critics say the Erdogan government has also started to use the laws to intimidate journalists and academics who dare to speak out, and is in danger of succumbing to the authoritarian tendencies which many in Turkey had hoped were a thing of the past.

Nuray Mert is a political scientist at Istanbul University and a commentator for the daily newspaper Milliyet. She also used to have a TV show, but that was cancelled after the prime minister lashed out at her in public, more or less accusing her of treason.

This autumn a transcript of a private phone conversation between herself and a friend who is now in prison was leaked to a pro-government newspaper, alongside commentaries accusing her of expressing sympathy for Kurdish separatists. The public condemnation has unnerved her. She says she is now worried about her personal safety.

“The real tension began two years ago,” she said, “with my criticism of politics getting more and more authoritarian, rather than more and more democratic. Turkey’s people are very nationalistic and the problem is the government encourages any public reaction against anyone who is critical of government policy.”

There is an irony here: a governing party which wins landslide elections through genuine popularity but which rejects criticism as unpatriotic. And it leaves a question mark.

How can Turkey position itself as a major power with real influence in the region, unless it addresses flaws at home, and first and foremost troubling limits on media freedom?

Interested in Byzantium and Patrick Leigh Fermor
View all posts by proverbs6to10 →
This entry was posted in Commentary & Politics and tagged Constantinople, Istanbul, Mehmet, Ottomans, Turkey, Turks. Bookmark the permalink.