Rowan Williams and the PM: when the turbulent priest turns on the ruler

Turbulent priests, schisms, revolts .. nothing changes. David Cameron is not the first leader to find himself profoundly at odds with his country’s leading cleric, writes Michael White

First published in The Guardian 9 June 2011 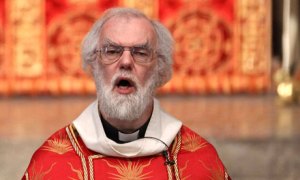 Rowan Williams’s decision to speak out was backed by the PM – perhaps a sign of how the balance of power has shifted from church to state. Photograph: Reuters

Learned man that he is, when Rowan Williams attacked the coalition’s economic policies he knew he was picking a scab on one of western society’s deepest wounds: the struggle for supremacy between secular and spiritual authority that so often pits archbishops of Canterbury against the government of the day.

Clergy no longer assert their superiority or pay for defiance with their lives. But within memory, archbishops have attacked foreign wars – in Iraq or Vietnam – urged more progressive social policies to help the poorest, and condemned indiscriminate bombing in the second world war. Winston Churchill was as annoyed by his clerical critics as Margaret Thatcher would be when Robert Runcie – holder of the Military Cross – insisted on prayers for the Argentinian war dead as well as Britain’s after the Falklands war of 1982.

The Arab spring is only the latest demonstration that tensions between clerics and secular modernisers is not confined to western states, where the issue was largely resolved in favour of secular power long ago. Yet conflict between theocratical and temporal claims in Iran or Saudi Arabia that would be familiar to medieval Europeans, still flare up, not least in the United States, whose 1787 constitution explicitly separated religion from the state to avoid repeating Europe’s bloody conflicts.

Each country’s struggle has been different. The best-known clash in England culminated in four knights murdering Thomas Becket in Canterbury Cathedral in 1170, after years of dispute between Henry II and his archbishop over the appointments of bishops and thus control of the wealth, taxes and power that they exercised. Becket had been Henry’s secular lord chancellor and the king misjudged where his loyalties would lie as archbishop.

Their feud echoed the 100-year-old “investiture crisis” between pope and German emperor – self-styled heir to the empire of Rome – over which appointed the other and ultimately called the shots. When Napoleon took the diadem from the pope’s hands and crowned himself emperor of France in 1804 he was making the same ancient point.

Eastern religions like Hinduism largely avoided the problem. Even the eastern Roman empire – Byzantium – did so after it split with Rome when the Orthodox church ceded primacy to the emperor. The Russian Orthodox church was reduced to a department of state by Peter the Great long before Stalin. In Cyprus, Archbishop Makarios was head of church and state until his death in 1977.

But Caesaro-papism – where Caesar also plays pope – re-emerged in the west in different guise.

England’s familiar version is better known than understood. Henry VIII was more interested in acquiring land, power and a new wife than the finer points of theology. But when he declared “this realm of England is an empire” he was cocking a snook at European claims to overlordship – by both pope and emperor – which would not seriously be revived until the Treaty of Rome (where else?) created the embryo EU in 1957.

Cardinal Wolsey, Henry’s ecclesiastical first minister, had fallen after failing to square his pope and monarch. Lord Chancellor Thomas More went to the block for a similar failure. Henry’s Catholic daughter, Queen Mary, burned his more obliging archbishop, Thomas Cranmer (1533-55) at the stake, but only after the cleric had been formally deposed by her pope and handed over for punishment. Her protestant sister Elizabeth did the same to Catholic dissidents; and her efforts to combine a degree of religious tolerance with political loyalty collapsed into half a century of civil strife after her death.

Another archbishop, William Laud (1633-45) was executed and another, William Sancroft (1678-90) deposed for refusing to take an oath of allegience to the protestant William and Mary who had just ousted the Catholic James II/VI.

Scottish Presbyterianism went its own way, as did Catholic Ireland. Wales would disestablish the official Anglican church in 1902. But the Anglican settlement of 1689 still stands with 26 senior bishops in the House of Lords and the Queen as head of the established churchWith few exceptions the church became what wits called “the Tory party at prayer”. So Tory was Archbishop William Howley (1828-48), who crowned Queen Victoria in 1837, that he led opposition to the Great Reform Act and wider toleration, as well; as being one of the last men in England to wear a wig.

Things slowly changed. Christians became more involved in political and social reform. After the Catholic hierarchy was readmitted to England, Cardinal Manning mediated the great London dock strike of 1889. In 1909 Cosmo Lang, then at York but later (1928-42) Canterbury, defended Lloyd George’s “People’s Budget” in the reactionary House of Lords — and even spoke up for the kaiser when war broke out in 1914.

When Lang died, Churchill opposed the promotion of George Bell, bishop of Chichester (“Brother Bell” to the trade unions) to the vacancy for his outspoken criticism of the bombing in Germany.

But William Temple (1942-44) who got the job — his father had also been archbishop — was also a progressive, sometime member of the Labour party, who backed the 1944 Education Act and the Beveridge report a negotiated peace with, not unconditional surrender of, the Axis powers. As church attendance – and power – declined, the church became more radical. Of postwar archbishops, Geoffrey Fisher (1945-61) was a former flogging headmaster who blocked Princess Margaret’s marriage to the divorced Peter Townsend, and George Carey (1991-2002), who ordained women priests but irritated his own flock, was Margaret Thatcher’s less troublesome replacement for the outspoken Runcie (1980-91).

Runcie had been a tank-commanding chum of Willie Whitelaw’s in the war, preferred by Thatcher over the more flamboyant Hugh Montefiore.. But he proved a thorn in her flesh, not least in publishing Faith in the City which criticised Tory social policy – a Marxist work, according to Norman Tebbit who has again attacked it on the airwaves. The days when archbishops’ outbursts were politely received and condemned only privately by ministers are long gone. David Cameron said he “profoundly disagreed” with many of Williams’ points. But this archbishop will not be sent to the Tower.

Interested in Byzantium and Patrick Leigh Fermor
View all posts by proverbs6to10 →
This entry was posted in Commentary & Politics and tagged Rowan Williams. Bookmark the permalink.