The time of Constantine approaches – The History of Rome 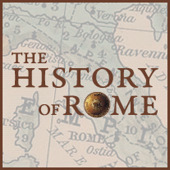 Many of you will know that I am a great fan of Mike Duncan’s wonderful award-winning podcast, and labour of love, The History of Rome. The latest episodes have now gone beyond the end of the crisis of the 3rd Century and are following Diocletian and his Tetrarchy as they struggle to unite the Empire once more and to bring in much needed social and economic reforms.

Of course it was in 293 AD that the two Augustii, Diocletian and Maximian invited Constantius and Galerius to share in their Imperial burdens, forming what we today call the Tetrarchy. Constantius was the father of Constantine the Great, founder of the city of Byzantium and the man who perhaps had one of the most significant impacts of all time by making Christianity the State religion.

If you want to hear the history of Rome explained clearly, to join a global community of fans, and have something useful to listen to when commuting in the car or on the train, or perhaps when doing chores around the house, go to iTunes and subscribe to what has to be the best podcast out there.

Interested in Byzantium and Patrick Leigh Fermor
View all posts by proverbs6to10 →
This entry was posted in Podcasts and tagged Byzantium, Constantine, Constantinople. Bookmark the permalink.