My blog is not like some which appear to be daily collections of thoughts or experiences from life. Preparing a new blog post can take quite some time, and my backlog goes back to about November of 2009! However, I am very lucky to have a joint contributor in Laura Diaz-Arnesto from Uruguay who has already prepared two very interesting and popular articles about Byzantine medicine (read them here). Laura’s latest piece centres on Manuel II Palaiologos who was the only Byzantine emperor to have visited England during the reign of Henry IV; what a strange experience this must have been for the English (and how cold for Manuel!). 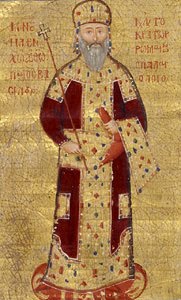 Having inherited an already deteriorating empire from his father John V Palaiologos, Manuel II Palaiologos took an uncertain move and made a journey to Western Europe to appeal for help in 1399. Sultan Bayezid I besieged Constantinople from 1394 to 1402. After some years of siege, Manuel II entrusted the city to his nephew and embarked (along with a suite of 40 people) on a long trip abroad to seek assistance against the Ottoman Empire from the courts of Western Europe. He was graciously received in Rome, Milan, London, and Paris; he stayed in the French capital for two years and became the only Byzantine emperor ever to visit England. The emperor employed Constantinopolitan relics and holy objects to win over the princes of Europe to help him against the Turks.

Manuel was the grandson of Emperor Andronikos III Palaiologos and Anna of Savoy, born Giovanna and daughter of Amadeus V, Count of Savoy. Created despotēs by his father, he served as governor in Thessalonica from 1369, at nineteen years of age. He was an intellectual, a soldier, a statesman, and the second-to-last emperor of the Eastern Roman Empire (1391-1425). He was the author of numerous works of varied character, including letters, poems, a Saint’s Life, treatises on theology and rhetoric, and an epitaph for his brother Theodore I Palaiologos. Even as emperor Manuel remained a man of letters. Sometimes he complained that his political obligations kept him from developing his artistic and intellectual inclinations. His writings have been preserved for posterity in spite of the conquest and destruction of Constantinople. 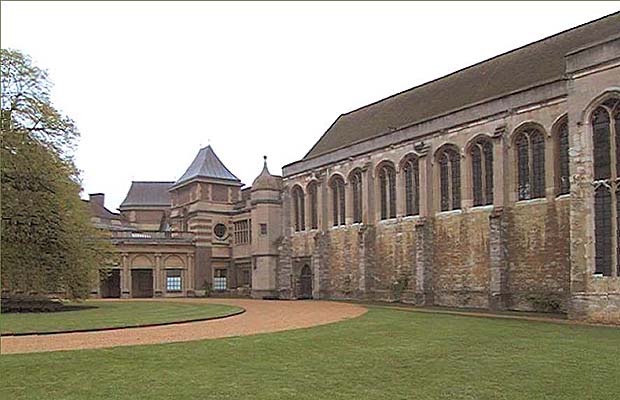 His visit to England happened in the year 1400, when Manuel was the honoured Christmas guest of King Henry IV at Eltham Palace, a handsome royal retreat set in good hunting country in those days. Eltham Palace is located in the London Borough of Greenwich, and the first palace was built in 1295. It was given to King Edward II by the Bishop of Durham in 1305, and used as a royal residence for the next two hundred years. According to tradition, it was at Eltham Palace that the event which inspired Edward III to found the Order of the Garter took place. The palace was a favourite of Henry IV, who hosted the Byzantine emperor during his visit to England. Henry organized a joust at Eltham Palace. King Henry VIII lived at Eltham as a child and the early Tudor monarchs celebrated Christmas at the palace until Greenwich Palace was rebuilt. Because Greenwich was more easily reached by boat, Eltham was less frequented.

Unfortunately, his visit to Europe failed to promote the much needed military aid. However, the highly educated emperor gained much sympathy in Europe, and it did much to promote cultural ties between Byzantium and the West. As the historian Steven Runciman explains “the French and English aristocracy received the king of Greeks with honour and respect and the intellectuals were happy to exchange views with such a sophisticated and educated person. They had already come in acquaintance with the classical Greek studies thanks to Manuel Chrysoloras who was a pioneer in spreading Greek literature in the West.”

Byzantine herbs and drugs – the magical and dangerous mandrake

Byzantine Herbs and Drugs – The Poison Aconite or Wolfsbane